I have so much to share in this post, that I will break it up into three sections! First, I will give you all some background as to the housing debacle that defined my first three weeks in Beijing! Second, I will describe the progress of the academic year, and how I am adjusting to the new style of learning at IUP. Finally, I am going to talk about some of the cool things I am discovering in Beijing!

So… Housing. As my last post mentioned, Hannah and I were shuffling around from place to place until the lease on our longterm apartment was to start. We finally reached that date, and moved into our own apartment! This apartment was everything of our dreams, we all had our own rooms, our bathroom was very clean, our kitchen was new, and our common room was the perfect size for hosting friends! Unfortunately, it was all too good to be true. The day after we moved into the apartment, on our first day of classes, we receive a text from our landlord who essentially told us that she wanted to rent to someone who would be here for longer, and so we had to leave. At first, Hannah, Jacob and I were flabbergasted because we had all signed a contract and the terms of the contract very clearly included protections against this kind of baseless eviction. However, as many people kindly explained, contracts do not mean a thing in China! So that very night we hurriedly packed up all the belongings that we had so lovingly unpacked and arranged, and moved into a three bedroom apartment that was a little further away, a whole lot grimier, and on the sixth floor without an elevator (see below for pictures of the incredible man who moved all of our luggage from one place to the next, although we did help carry all the bags up all six flights!). The one ~little~ problem with this new place was the fact that one of the bedrooms was still being occupied. So Hannah and I moved right back in together! But luckily this arrangement only lasted a week, and we were able to clean the apartment up and have since learned to love its charm. It made for an incredibly hectic couple of weeks, but now we are just grateful to be settled into our semipermanent home. Also included in the photos below, a snapshot of my kinda messy room and a dinner we hosted in our minuscule but cozy living room! 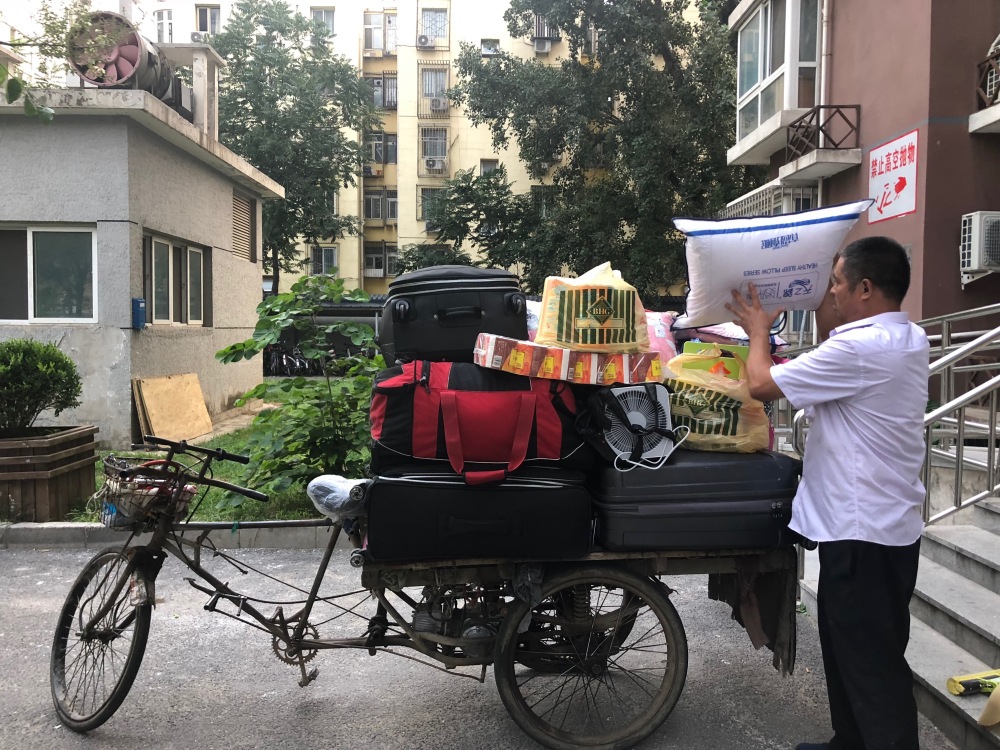 Now onto part two, talking about classes. The style of class is something so completely different than any other way that I have studied Chinese in the past. Whereas other programs have been really focused on quickly learning a lot of vocabulary and grammar patterns, IUP is more focused on consistently reviewing and using vocabulary and grammar in new ways. I am still adjusting to the style, but in all I really think this will help me take my understanding of the language to a deeper level. Although I initially was frustrated by my placement in a lower level, I really think that I am now filling in gaps of my understanding that I didn’t know existed! Also, I ride my bike to school every day and have been enjoying the perks of Beijing’s many ride shares!! Although, I am going to be buying a bike very soon, pictures to come! 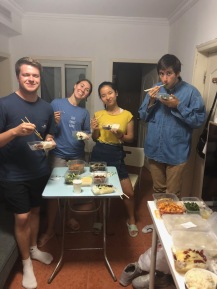 The view from my classroom is absolutely gorgeous, and the weather in Beijing has been amazing. We had an unprecedented full week of blue skies and the weather is slowly turning into a more pleasantly cool fall. A fun anecdote on the way that the CCP is able to control the way Beijing is perceived by foreigners: recently a conference was hosted in Beijing (the Africa-China Conference), that was attended by the president of Kenya, President Uhuru Kenyatta. In order to make sure that no protests occurred, the city moved along smoothly, and it continued to appear that China was making huge strides toward fixing its air pollution problem, the government shut down factories north of Beijing, ensuring that for the week of the conference that there were blue skies every day! Additional security checks also went up in all the subways, where before the security checks were more of a formality, during the week of the conference, the scanning sticks were surprisingly active! All of these little shifts just go to show how tight of a grip the CCP has on the functioning of the city, and how much the perception means to it. See below for a picture of both the amazing view from my classroom and the perks of hosting world leaders!

Ok, part three. This section is just about the amazing new aspects that I am discovering about Beijing. The last time I lived here (the Spring of 2017), school pretty much consumed all of my time, and I had little room for self exploration. However, as a college graduate (aka an ~adult~), I really made a goal for myself to seek out likeminded people and put down some roots in the city. One of the ways that I am doing this is by exploring my queer identity. As some of you may know, I have identified as bisexual for about three years now, it is a really important part of who I am and was one of my main worries about coming to China. I had debated about whether I was even going to really be “out” in China. However, after talking to some other awesome Fulbrighters about their experiences being queer in China and Asia more generally, I decided it would be more harmful to myself to try and hide it. As a result, I have been getting to know the queer scene in Beijing a little bit, which I was pleasantly surprised to find is very active. The app, WeChat, is also used as a gathering place of sorts, and I was lucky to have a friend who added me into a bunch of groups for queer women. I was warned that in China, it is relatively easy to be queer as a foreigner, because there is a narrative that homosexuality is a quirk of foreigners that “does not exist in Chinese people, and when it does that it is the result of negative foreign influence” (sense my sarcasm and disdain). Therefore, I expected the people who are in these groups and attend events to be mostly foreign. While this was true to some extent, there were also a lot of Chinese people! All in all, it has been a great way to meet new people and find new networks for support in this new city. More information to come as time passes.

In general, life definitely has not been easy. But I think a lot of the turbulence I have been experiencing has resulted more from the move that all graduates make from the safety of knowing everyone on campus and having all of your closest friends living five minutes away. This experience is heightened when you move abroad because in addition to it being a new/  big city, you are also really really far away from all those you call dear! And they are not just a simple phone call away because when you are feeling most down, there is a large chance that they will be fast asleep! I have also learned that it is really rude to call people repeatedly at 6am or even 8am, just because they “should” be awake… (@Andrea Moneton if you are reading this). Throughout all this chaos, I still feel super grateful and really happy to be here in BJ!

Thanks for reading! I have put a few photos below: Hannah and me at Hou Hai (a place emperors used to go to just hang out..), Hannah, Tyler and me at a coffee expo chatting with a Palestinian man who sells Yunnanese beans, and a really funny t-shirt my friend bought that was probably designed by someone who doesn’t speak English well! Stay tuned for more rambling posts!